If you have any stories and photographs, please send them using the Contact Us page and we will publish them here.

Due to the Data Protection Act, it is not possible to publish on a public website a list of all members with their addresses, telephone numbers and other personal details.

If you wish to check your membership of the KCLEA or get in touch with colleagues from the past, you should go via the Alumni Office who hold the central database of information about all past students.  The Members area of this website is merely for maintenance of the website.

Three electrical engineers who graduated in 1961 held a get-together on Sunday 10th June 2007. Two of them had not met for over 44 years! We had a meal in a restaurant near Hatton Locks, Warwickshire, and then spent some hours enjoying each other's company and the sunshine. If you know any of these three King's Engineers and would like to get back in touch, we would be delighted to hear from you - please drop a line to the Membership Secretary. 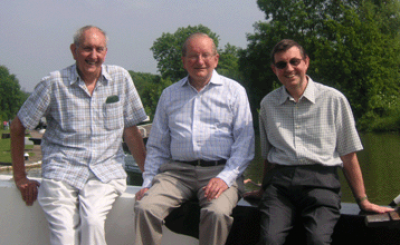 Brian Phillips joined GEC Telecommunications in September 1961 and retired from the same company in 2000 (which had by then become Marconi). He lives with his wife Margaret in Rugby, Warwickshire.

Dennis Air joined English Electric at Stafford after graduating, and being a native of Australia, returned there in 1964 to continue his engineering career. Over the years he moved away from electrical engineering, and is now working part time helping to resolve disputes in the construction industry. He lives in Sydney with his wife Sue.

Gerry Lawrence also joined GEC Telecommunications at the same time as Brian, and retired in September 2001, having managed to complete 40 years service. He lives with his wife Rosemary in Kenilworth, Warwickshire.

We had a great time remembering life at King's between 1958 and 1961 - things like defending Reggie, parading him round the Strand, and snatching the University College mascot, Phineas. We remembered the surveying on Hampstead Heath which was part of our first year civil engineering, designing a gear box as part of our mechanical engineering, and running up all the engines and electrical machinery for our practical work. We also recalled the time after taking our finals when we hired two sailing boats on the Norfolk Broads. We three were in one, and in the other were Peter Tamm, John Evans and John Dymott - who managed to snap their mast on the first day sailing! Nostalgia isn't what it used to be!