A trophy, named ‘The ‘13’ Club Trophy’, is awarded to the ‘finals’ year, either past or to come, whose record of reunions at K.C.L.E.A. functions and at special gatherings of its members is judged to be the best during the preceding year. The trophy is a statue of ‘Reggie’ suitably mounted on a pedestal. 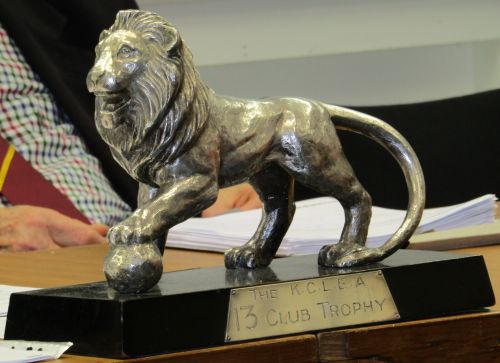 The following is an extract from the conditions for the award of the 13 Club Trophy:

The full history and conditions can be found here.

Another change that has, reluctantly, been made is that the trophy should remain in KCLEA custody in the future and that recipients should be given a medal as a permanent personal memento instead. This decision was taken because of the increasingly international nature of the former student body and, hence, the possible increasingly international spread of recipients of the Trophy, making the dangers and difficulties of allowing the trophy to travel far from London, significant issues.

The Trophy itself would be exhibited at the Trophy presentation and all KCLEA functions.